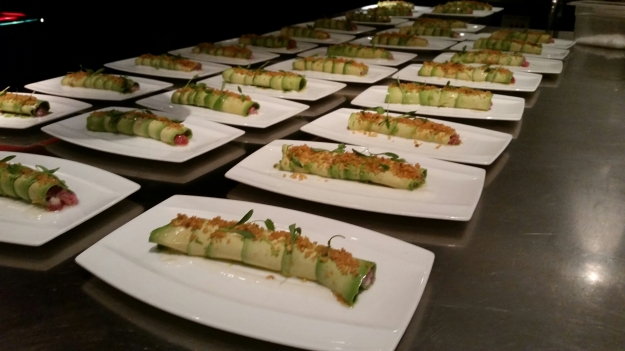 Party time here is the same as it was at the old restaurant – plates anywhere and everywhere and an army of one dish at a time. Our menu is made up entirely of tapas that are meant to be shared family style (one dish per four people, approximately), so the larger our “count” the larger the party.

Friday and Saturday were busy as expected, about 400+ covers each night, including some clusters of 10- and 15-tops. I worked the closing shift on Saturday which kinda sucked because I was exhausted from the week and just wanted to get my weekend started! It was a reminder that while I do love my job and pursuing my passion, a job is still a job and I look forward to time off just like everyone else. haha

Today was off to a slow start but we had a private party right during the peak of service so that was a nice ass-kicking. Right after I sent out 10 orders of beef cheeks (by myself), I was hit with two consecutive waves of tickets. I kept up with the first one but the second hit hard and I had to ask for help to bail me out. To be honest, I didn’t really ask… someone had fortunately walked by and noticed I was struggling. That’s something I need to get more comfortable with – asking for help.

I miss the old restaurant where I was a bigger fish in a smaller pond, where I knew how to help on each station and could make myself useful bailing other people out. Instead, I’m still learning the ropes and haven’t had many chances to check out the other stations yet. It just makes me more determined to get better so I won’t feel so new anymore. I’ve been making friends at least, though it still feels awkward sometimes since a lot of them had been working together for a long time (it’s always hard trying to break into an established group!).

Hello, friends! Matcha Bunny here. Thank you for coming along for the ride as I embark on my journey into the restaurant industry.

At this point in the story, I have moved on from my first kitchen. In February 2015, I accepted a position at a renowned restaurant that is part of a James Beard Award-winning Chef's restaurant group. I now run a hot station as line cook and man, my arms look awful from all the oil burns!

These are my insights to give you a glimpse into the underground world of Kitchen Life.