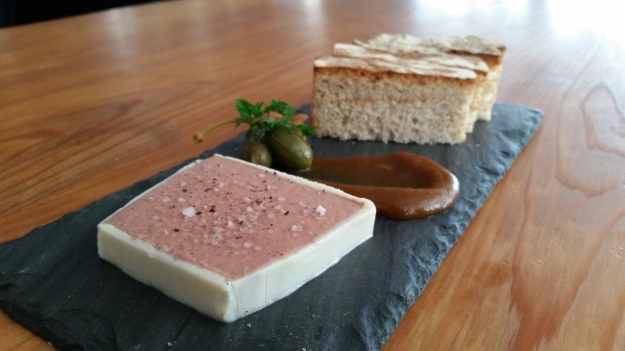 I was reminded of my old office days pre-vacation (or even just some Fridays depending on the week), making checklists to ensure that everything was in its place before my departure in order to minimize chaos upon my return. In many ways, things are different and the same now. Though I am no longer the only person with expertise in my field (or station), the others who are most familiar will be unavailable and additionally the person covering for me on our busiest night of the week (Saturday) is not able to come in for any prep. So, I enjoy a bit of job security (Chef made sure to teasingly guilt me about leaving him short-staffed, which really just means he values my contributions to the kitchen brigade… right? haha).

Anyway, all this means that I’ve spent my short week cramming in five days’ worth of work… including a last minute scramble during service tonight to whip up a batch of happy hour jars. Not because I was running out tonight but because I knew there wouldn’t be enough for tomorrow. Sigh.

I got two gnarly burns today too, the most notable having been caused by a spoon. That’s right, a spoon. It was a MacGyvered repair for the faulty latch on the oven door on the Meat station. Anyway, I had cradled the spoon on my apron and unbeknownst to me, it slid toward my elbow and seared a distinctly round mark on my flesh. I swear I could hear the sizzle.

Happy Hour started off slow, but by the time 6 o clock rolled around, it seemed like normal people had finally gotten off work because the bar was bumpin’! Dinner too started off quiet but little did we know, it was just the calm before the storm. At 8:20, it appeared that the Front of House seated the entire dining room all at once because we were suddenly swamped by literally 25 back to back tickets. Endless haunting printing sounds, and they weren’t small tickets either… dates ordering three full courses, parties of 5 and 6, and the 13-top that had called ahead. Two consecutive charcuterie boards plus a dozen a la carte terrines for me, and that was relatively tame compared to all the salads that had checked in (it IS a warm day today).

At the end, I felt the quintessential Kitchen Life experience – amped up but exhausted all at the same time. Just another day in the Life.

Hello, friends! Matcha Bunny here. Thank you for coming along for the ride as I embark on my journey into the restaurant industry.

At this point in the story, I have moved on from my first kitchen. In February 2015, I accepted a position at a renowned restaurant that is part of a James Beard Award-winning Chef's restaurant group. I now run a hot station as line cook and man, my arms look awful from all the oil burns!

These are my insights to give you a glimpse into the underground world of Kitchen Life.